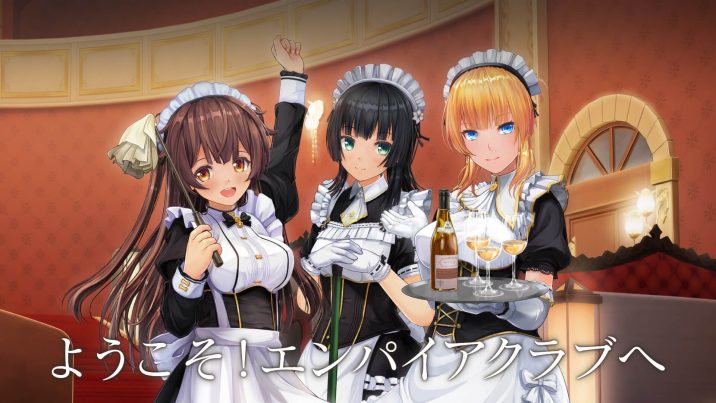 ■Story
Empire Club. The most luxurious bar that ladies and gentlemen come and gather.
The beautiful maids who worked there danced and talked with the customers to amuse them.

One day, the protagonist was told to meet his uncle.
His uncle told him he had newly opened a future-next generation Empire Club which was customizable and filled with new possibilities.
Unexpectedly, his uncle generously handed over the ownership of Empire Club… However, Empire Club was secretly in huge debt.
Although he cursed his uncle for fleeing outside of the country neglecting Empire Club as it was, he had no choice but to run the place.
Not only he had to save the club from debt, there were so many outrageous problems. It was obvious that it wouldn’t be easy to solve everything.
In front of the protagonist who was totally at a loss, three maids appeared. They were the last few maids who remained working at Empire Club.
“Maria Seido” who is innocent and cheerful.
“Mafuyu Himuro” with serious and loyal personality.
“Risa Takizawa” a dignified, mature woman.
Starting with these three, the protagonist and maids cooperate to rebuild the future-next generation Empire club.

■Character Edits
The most crucial feature of this product- Editing characters.
You would easily be able to customize your maids however you like.
We have added some functions for players to be able to create even more idealistic characters.

■VS Dance
Players can battle against rivals who appear in the story, by Rhythm Acting games.
No worries. You can skip the games if you’d like.

Otomi Cloud – MEGA (Only for Supporter!)

MINIMUM:
OS: WindowsR 7/8.1/10 (All versions must be 64-bit.)
Processor: Core i5 Quad-core 2.5Ghz or higher
Memory: 6 GB RAM
Graphics: 1280 x 720 or higher, DirectX11 compatible GPU mid-range or above / GeForce GTX 560 or above OR Radeon R7 260X or above
DirectX: Version 11
Network: Broadband Internet connection
Storage: 10 GB available space
Additional Notes: [About GPU] Not guaranteed to work with Laptops, all in one desktops, and tablet PCs. Not guaranteed to work with Mobile GPU and IntelHD Series GPU. Does not correspond with RadeonHD Series GPU. Please install the latest Graphic Driver that is provided by your PC brand. [About VR device] In the case you playing in VR mode, please meet the minimum system requirements of your VR device. Please install the latest Runtime that is provided by HMD brand. [About Internet Environment] This product does not need internet connection to play, however, some contents will not be available offline. Not compatible with mobile Internet connection and tethering devices. [About OS] Not compatible with 32bitOS. Guaranteed to work only with the latest service pack. Please follow the warranty period of OS providers. Windows 7 has been announced that the warranty lasts until January, 2020.