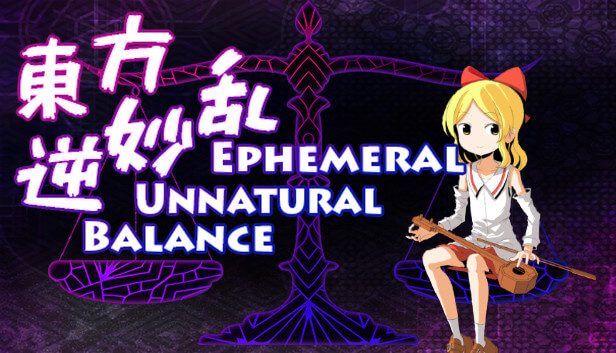 ♎ STORY ♎
A peaceful spring in the land of Gensokyo descends into chaos. The balance of power has been suddenly reversed! The strong are now weak, and the weak are now strong. It’s another incident, and incidents like this are usually resolved in a snap. This time, Gensokyo’s usual heroines find themselves weaker than a common fairy. Since the likes of Reimu and Marisa are in no condition to solve an incident, three atypical protagonists step in to save Gensokyo.
♎ GAMEPLAY ♎

Each character has their own unique firing pattern. Pick the one you enjoy the most and dodge your way through the six-stage main game. After you’ve successfully cleared the main scenario, use your honed skills to challenge the unlockable Extra stage. The main game has four difficulties to choose from, and the Extra stage has two, so you can tip Gensokyo’s scales back into balance regardless of your skill level.
♎ DISCORD ♎

Sometimes the best way to fix something is to shatter it completely. That’s why you can harness the power of the incident (and the Balance Gauge) to activate Discord Mode. Using this new mode will temporarily increase both risk and reward. Patterns will become more intense, but if you manage to survive the barrage you will be rewarded with additional lives (and a much higher score).

Players who want a higher challenge can enjoy Dissonant Mode, where Discord is permanently enabled. While playing in Dissonant Mode, the Balance gauge is used to power Flash Bombs instead. A Flash Bomb will clear bullets in a radius around you. If a regular enemy is caught in the radius of one, that enemy will be marked. Marked enemies will drop additional items, including extra life and bomb pieces if the enemy is sufficiently powerful.