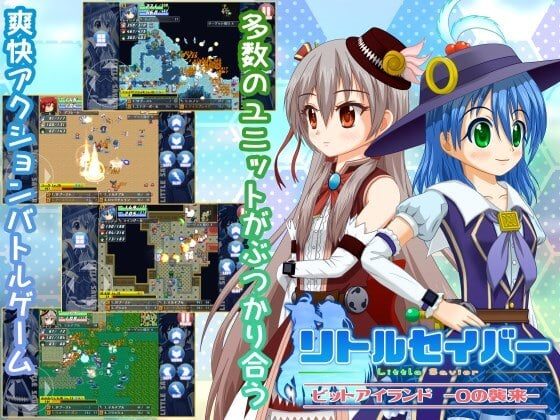 Little Savior is a real-time battle action game in which many units fight with each other. The player operates directly as one of the units to fight. The peers automatically decide the battle status and fight automatically, but it is possible for the player to direct the fellow’s actions by changing the command.

During the game, creatures “bit” that live on bit island run away and fight to stop it. Bits can be friends by fighting and can be fighting together.

The composition of friends can be set to be a member of the team that the player operates as a leader, or to another team. All can be freely organized according to the number and type of friends, and there is almost no limit.

The player unit’s ability does not increase by the ability of the weapon only by fighting. Each ability will be raised with money. The unit’s ability and weapon’s ability consist of several parameters, and you can choose which parameter to raise. So there are individualities such as extending strengths and weaknesses and strengthening easy-to-use weapons by players.

There are other elements as well.

● Multiple simultaneous cooperation play
● Random map of the battle field (there is also a fixed map)
● Support English version (except for some)
● We cope with multiple input devices such as keyboard, mouse, game pad
● Works with many PCs and tablets for 2D games

Please refer to the homepage for details.