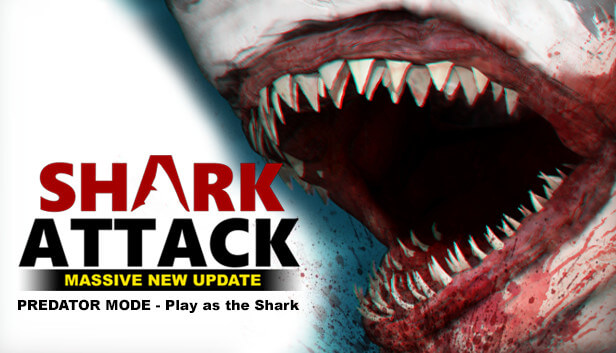 Shark Attack Deathmatch 2 captures the thrill of underwater multi-player mayhem like no other game. The combat is savage, gritty and brutal. Players hunt each other down in various game modes with the constant threat of terrifying sharks joining in on the bloodshed.Tear divers apart as you take on the the role as the ocean’s top apex predator, The Great White.

Brutal Multiplayer Combat
Multi-player combat in Shark Attack Deathmatch 2 is intense. Up to 8 Online Players battle it out against each other with the added threat of terrifying sharks joining in on the mayhem.

Predator Mode- Play as the Great White Shark
Players get a chance to take on the role of the oceans top apex predator , the Great White. Tear divers limb from limb from in this visceral experience as the hunter becomes the hunted.

Online CO-OP Survival Challenge
Shark Attack Deathmatch 2 features the most intense CO-OP underwater action you will ever experience.
It’s just you and a friend against a terrifying onslaught of sharks! Will you survive?

Single Player Survival Challenge
Survival is a single player experience where players take on a constant onslaught of some of the most terrifying beasts in the ocean. Every encounter you survive could have you climbing the global leaderboard for prestige and world domination.

Breathtaking Seascapes and Levels
The game already features 6 amazing maps, each with it’s own unique style and location. Whether it be hunting down the Ragged Tooth Sharks in The Boneyard, surviving brutal attacks in the flooded New York City map called Tsunami, fighting among the carnage of Wrecks and Reefs, exploring Atlantis, or battling between the Russian Attack Subs in The Red Tide. New maps will be released constantly during the early access process.

Character Customization
Players have complete control of all their gear. Personalize Wetsuits, flippers, goggles, tanks, snorkels and more. Create your own signature look that other players recognise and will soon grow to fear.

Terrifying Sharks and Creatures
Jump straight into the action and take on a variety of terrifying sharks. Great Whites, Ragged-Tooth’s, Bull Sharks, Black Tip Reef Sharks, Shortfin Mako Sharks and Tiger Sharks, when provoked will hunt you down and become your worst nightmare.