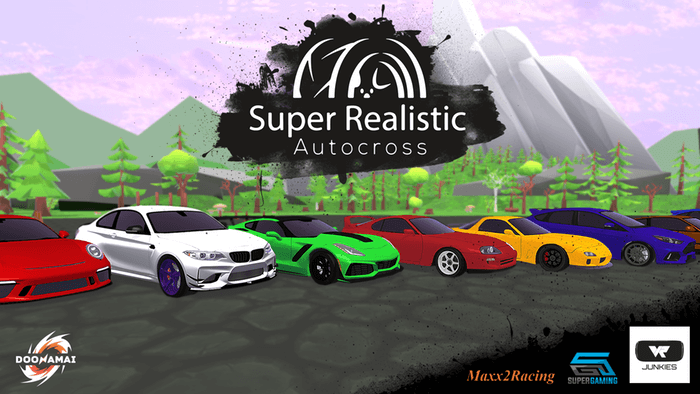 Super Realistic Autocross is an arcade-style racing simulator that brings the fun of Solo Autocross to your computer. Play dozens of tracks that hone your driving skills and teach the basics of Autocross, a real sport that not many know about. Unlock a variety of cars, each with different driving styles to master. Complete extraordinary challenges using the skill you learn as your rank up. And, more importantly, prove yourself and beat the most gifted racers out there.

With the help of professional drivers, Super Realistic Autocross is becoming one of the fastest growing Autocross games in the nation. With over 50 tracks planned by release, and over double that in free planned patches, you will never be bored. Race at tracks made by pros, and even tracks that are raced in real-life autocross. Master the various cars in the game and those added over time while the game constantly grows.

RACE
Learn What Makes A Real Driver
Everyone can hit a gas pedal and drive in a straight line. Autocrossers learn the fundamentals of driving fast around turns and varying difficulty obstacles making them the best drivers. Learn the capability of the car and drive it to its max potential.

MURDER CONES
Let The Rage Out
If you aren’t killing cones, you aren’t trying hard enough. Push it to the limit and hit some cones in the quest for glory, but be careful because sometimes those cones may fight back (obviously due to Super Realism).

GET FASTER
Practice Makes Perfect
In Super Realistic Autocross you have once advantage that most do not, the ability to replay a track as many times as you need to get faster. Learn the track, learn the car, and keep improving. As all Autocrossers would say, you are only out there to beat yourself and get faster.

FEATURES
– Race at dozens of tracks in various environments.

– Have fun on special tracks with outrageous obstacles.

– Discover the best driving techniques for each car.

– Learn the basics of Autocross.

– Beat the times of Professionals around the world on the Leaderboards!

**Super Realistic Autocross is playable with controller, and brings the best experience when played with one. Xbox One, and Logitech controllers have been tested. Simply use the Unity launcher to set the graphical settings you want, and click play. Then the rest of the game plays off the controller.**