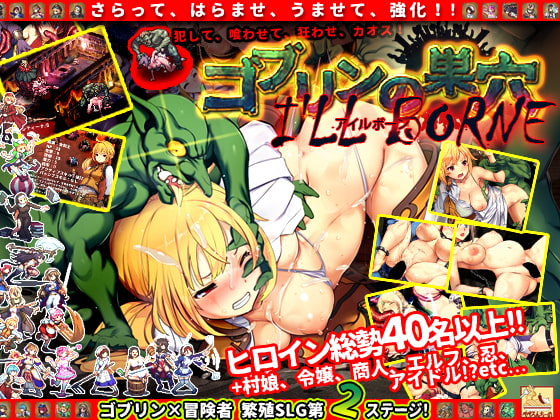 This is an extra-large expansion pack, but can be played on its own.
You don’t need to own “Goblin Burrow (RJ291561)” to run this game. It can work standalone.
However, if you do have both, then you’ll be able to play Goblin Musou!

What do you know about goblins?

They’re mischievous, immoral little creatures, the lowest of the low when it comes to monsters. They’re quite easily dealt with. They’re often used as a means for adventurers to measure their strength. They’re just goblins, after all.

This continent, too, is infested with the things.

However, it is also home to an abundance of life from every race. They’ve formed communities and generally live together in peace. Peace breeds softness, however, and nothing is softer than the body of a beautiful female adventurer…

That’s all that goblins think about, and this age of peace is the perfect time for them to strike. Nobody knew just how much influence the goblin threat would have on the continent, however…

Unbeknownst to most in the civilized world, goblins lurked at the gates.
Why not peer into their world?

1) Join the goblin horde! The burrow is divided into two sections: the raiders who assault Villages, and the Defenders who protect the nest.

2) Build your goblin army and begin the invasion! Attack different targets and acquire useful items! Defend against those pesky humans and protect your little green livelihood!

3) Goblins are weak, and some will definitely die. But it’s okay! A goblin’s greatest weapon is its drive to procreate. Capture women you’ve defeated and bring them back to the burrow, then make back those losses the only way a goblin can! If things go well, something very powerful may be born…

4) Feed the offspring to raise their stats. Strengthen the horde, expand all over the continent,. and capture new prey! As generations come and go, the goblins will grow stronger. Exactly how powerful they’ll become is up to the choices you make…

– There are not voice lines for DLC3
– Saves from previous versions may not be compatible with JPNv.211224. If you are getting an error when capturing new seedbeds or attempting to breed an already captured seedbed, simply remove your defensive army and wait or grind the Adventurer Tower until you are attacked. A fresh NewGame+ should solve the issue
– If you get an error with a bunch of ???? when starting the game, you are not running the game in Japanese localisation. Use Locale Emulator.
– There are no voice lines for the mating scenes. This is a peperoncino issue, not an issue with the translation.
– Large portions of the game are MTL. Most of the translation has been bug tested, but I cannot rule out the possibility that MTL introduced bugs will occur.
– If you want to be especially helpful when reporting a bug, go to your ./savedata folder and share the krkr.console.log file if it exists
– Dinner and Arena functions are not supported

– Added a new job in the Seedbed Info menu when a seedbed is debauched (WIP)
– Added ‘Debauched in %s SAN’ to the Seedbed Info menu to help with planning for endings
– Portrait in Seedbed Info menu now changes depending on seedbed state
– Added the word wrapping script from Goblin Burrow (credit to whoever created and adapted it, looks like the Amaterasu Kirikiri WordWrap) with some modifications by me to bring it up to date with new Kirikiri distros used by peperoncino