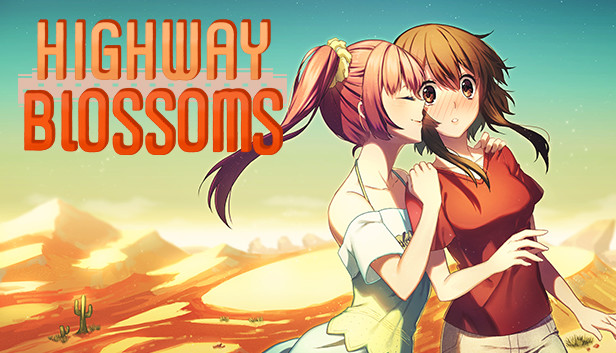 Highway Blossoms: Remastered is the new definitive romance treasure hunt road trip experience. Most importantly, it’s now fully voiced in English by a talented cast of actors. We’ve also remastered the soundtrack for a better listening experience, touched up the art for a better viewing experience, and added a Chinese translation for a better Chinese reading experience. The bug fixes are numerous, the improvements are vast, and the full changelog can be found in the announcements section.

Highway Blossoms is a short yuri kinetic novel set in the American Southwest. After an old gold rush miner’s journal is discovered, supposedly detailing where he hid parts of his stash, a nationwide craze begins as would-be prospectors try to solve its clues and strike it rich.

Amber couldn’t care less. Wandering the desert in a recently-inherited motorhome, she mourns the loss of her grandfather – indifferent and unaware of the hunt happening around her. It’s not until she meets Marina, a young hitchhiker lost in New Mexico that the girls get swept up in the rush.