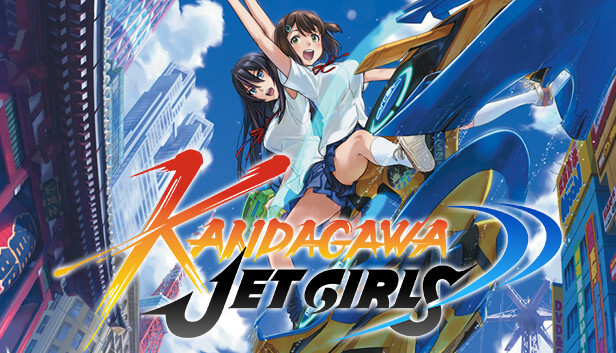 From the creators of SENRAN KAGURA, experience a fresh, colorful racing extravaganza with Kandagawa Jet Girls!

Welcome to near-future Tokyo, where the hottest new athletes race high-tech jet machines through urban waterways for thrills and glory!

Choose from seven teams of two Jet Racers, each with their own story. Each team has a Jetter, who steers through each course’s gauntlet of obstacles, and a Shooter, who uses a variety of water weapons to blast your team’s opponents off the track. Coordinate between them to perform speed-boosting maneuvers and pinpoint-accurate trick shots. Of course, every other team has a Shooter too, so watch your back and keep your shields up!

Tackle the River Alone or Compete Online
Experience the game’s robust Story Mode with each of the seven two-girl teams having their own unique multi-episode arc totaling 64 episodes of lighthearted racing drama, or go online for multiplayer mayhem against up to three opponents in casual or ranked matches. Upload your best times in Time Attack mode and compete against the records of the best players in the world.

Go Under the Hood and Customize
Winning races and challenges will unlock hundreds of customization options, from the girls’ swimsuits and hairstyles to the jet machines’ skins, decals, and special effects. The inside of the jet machine is as customizable as the outside, allowing players to fine tune its performance to best match their driving style.

Shinobi Surprise!
Includes playable characters Ryōna and Ryōbi from the SENRAN KAGURA series as a special bonus for all players! Eight other shinobi from the busty brawler franchise will also make appearances as premium DLC.

The game is updated to v1.02 and includes the following DLC: