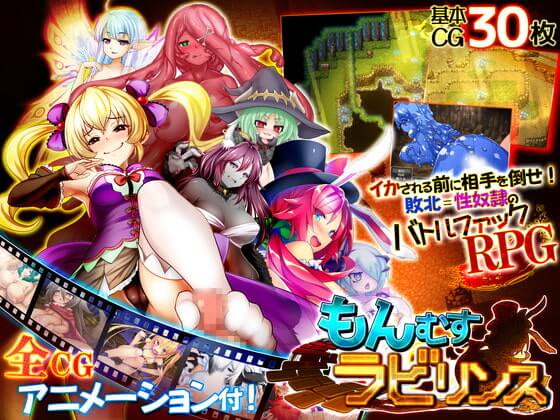 [Concept]
—————————————————————————–
In search for a missing villager, the protagonist eventually arrived
at a mysterious underground ruin, a habitat of various types of monster girls.

To escape from there alive or to be r*ped and made into a slave…
Which fate will he attain? A “Battle F*ck RPG where you sex your way to the exit!

Soon after he realizes that he has fallen to an underground cave.
There are a lot of monster girls that sexually assault humans!
He finds a note of somebody, telling him that if he cummed in intercourse
with any monster girls, he will be paralyzed and made into their slave.

To get out of this underground dungeon, he has to overcome many temptations!

– CGs are all animated! Monster girls plays with the protagonist in various moves!

[Olivia] CV: Yotsuba Tsuyuri
The Queen Elf who governs a community of Elves and fairies.
Treats sex slaves harshly despite her easygoing personality.

[Amelia] CV: Yotsuba Tsuyuri
A preppy witch girl who is a bit slow-witted and clumsy.
Not good at delicate kind of magics though having a lot of mana.
Helped by the protagonist when she was somehow caught in a hole, but…

[Abigail] CV: Ryou Suzuki
The head of witches. The shortest witch but having the biggest
tits at the same time. Knowing very essences of all magics.

[Chloe] CV: Mafuyu Hiiragi
A wererabbit who controls a certain facility in the underground ruin.
Doesn’t show emotional ups and downs so much.
Shows up everywhere but doesn’t stay for a long time.

[Eva] CV: Chiroru Ohyama
The demon lord who was defeated by the hero in past.
Looks small but her magic is stronger than any other.
Concentrating on healing herself in a certain way.

[Ohm] CV: Satsuki Akushiro
A slime that has experienced mutations. Exists somewhere in the ruin.
The body absorbs everything like endlessly spreading.