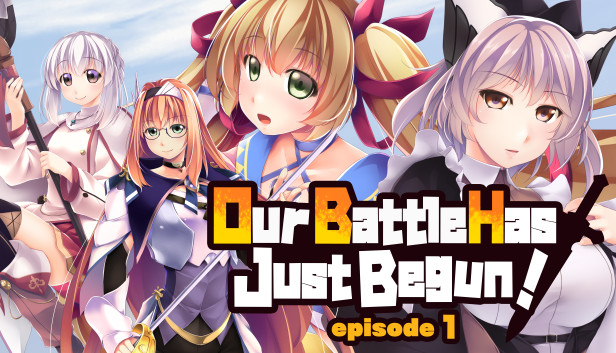 “Our Battle Has Just Begun!” is Visual novel game filled with heroes and heroines…
except it starts where “games” usually end.

You become the Hero who defeated the Demon Lord and saved
the realm while enjoying the romance that unfolds between you
and the heroines you meet on your triumphant return journey.

Avoid challenges and happy endings with heroines
to continue on your journey back to your homeland.

In the midst of an unconscious state,
you hear a voice desperately calling out to you.

That’s when you wake up and see…
the Demon King cursing you as he vanishes into thin air!

“…Huh? Is this for real?! But I’m way too late!
The Demon Lord was already defeated when I got here!”

And so you become the Hero destined to save the realm.
At the very moment you deal a deadly blow to the Demon Lord,
your memories of your previous life come flowing back.

You have saved the world and yet you don’t remember doing it.
In other words, the hardest part of your fantasy world life
is already long over!

And thus, the heroic group decides to return to their homeland.
Each country you stop in along the way welcomes you with
open arms as the Hero who saved the realm.

It seems like you have it made, but maybe it really is too good
to be true. The real battle is only getting started!