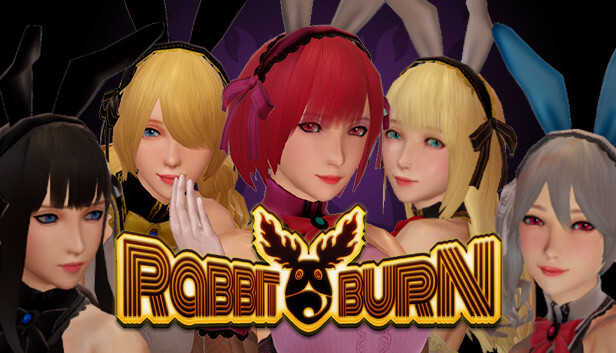 This is the crazy and depraved billiards-based game, Rabbit Burn!

One day you find yourself kidnapped by mysterious men in rabbit masks and brought to the Rabbit House, a world-famous casino where, unbeknownst to the public, an immoral game of money, violence, and desire is played day and night in a secret underground arena.

If you survive all the way through the final level, you will be made the new owner of the Rabbit House. But the other contestants don’t like the sound of that, and will do everything they can to stop you. Keep your guard up and your eyes on the prize!

Rabbit-masked men and bunny girls participate in a game played on a field modeled after a billiards table. The goal of each rabbit man (including your character) is to beat down the other rabbit men and get with the beautiful bunny girls. If a rabbit man is able to gather all the bunny girls on the field to himself, he wins.

As the player, you can shoot giant billiard balls across the playing field, dealing damage to enemy rabbit men who get hit and causing chain-reacting explosions whenever you ricochet one ball off another. Aim carefully to lead your character to victory!