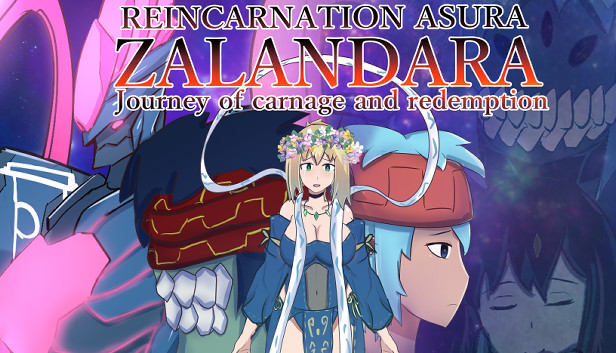 Fuckin’ dress up roguelike shooter action game
Zarandara is an action game in the style of a bullet-hell roguelike.
The power of Shakti allows you to recover Mp through sexual intercourse, and when your climax gauge is at its maximum, your Hp and Mp are fully recovered.
You can use slashes to cancel bullets and destroy terrain with some weapons. By acquiring items, the heroine can get piercings and change her outfit.

Get weapons and other items in dungeons to get the upper hand in the battle against the giant killing weapon Giga Flame!

STORY
Zarandara, the emperor, priest, and strongest warrior of the Asuras, is turned into a sex-crazed monster by a “supernatural being” as punishment for failing to protect his beloved wife, Vrinda.
At the same time, the mysterious “Black Carnage” appears all over the Indus continent, indiscriminately killing all humans.
Zarandala and his wife, Vrinda, are led by the mysterious Vedic tribe, the Mofini, on a grueling journey to stop the Black Carnage by destroying the killing weapons and performing the “Shakti Ritual” in various locations.

You can also use slashes to eliminate the enemy’s barrage.
Treasure chests contain weapons, dash performance upgrades, and items that power up your Hp and Mp.
In addition, by collecting Zepto Machines, which are dropped when you defeat enemies, you can start from the beginning in the custom menu, raise your level, open up the entire MAP, and advance the action in your favor.

*If you have difficulty in clearing the game on a high difficulty level, we have implemented a complete invincibility mode as a help function, so please use it if you are not good at action.

*The heroine’s pregnancy mode will be unlocked after defeating the last boss.

*After the big update, additional scenarios, additional CG, new bosses, and a true roguelike dungeon with high difficulty will be implemented.