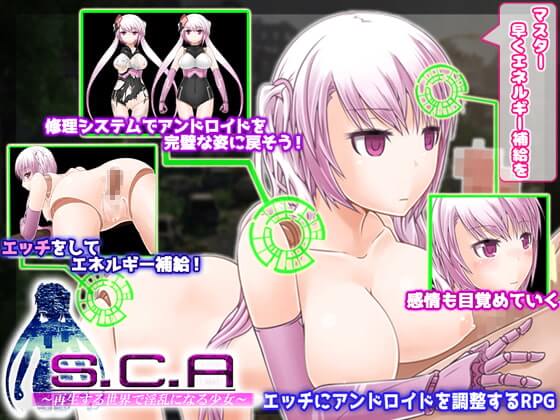 Due to the mass-scale war happened decades ago, the world has been devastated. Sexually Customized Android.

A much less number of humans barely survived, but they have manage
to live in a unity without getting pessimistic about the future.

In such a situation, a boy familiar with anything mechanical Ask struggles to live on.
Utilizing his knowledge, he passes his time assisting the reconstruction of the human
society by collecting abandoned mechanical parts and assembling them into helpful machines.

One day, while Ask is digging up the devastated town in search of parts,
he finds a half-broken female android is lying under debris.

That turns out to be a rare type of android which was owned only by very limited people.
Ask is strongly attracted by its rarity and well-organized modeling, so he decided to
take it into his house and repair it… With a dirty motive to make it along with his preference.

* H Scenes
15 base CGs! 22 scenes total!
Depending on whether she owns her emotion or not,
you may see different things in the scenes you have once seen!

* Repair System
You can earn “pt” by finishing quests and beating enemies.
When he repairs the android using pt, its appearance changes!
The scenario progresses and H scenes are added too.

* Quest System
Fulfill townspeople’s wishes to get various items!
Sometimes he gets attachment parts of the heroine.