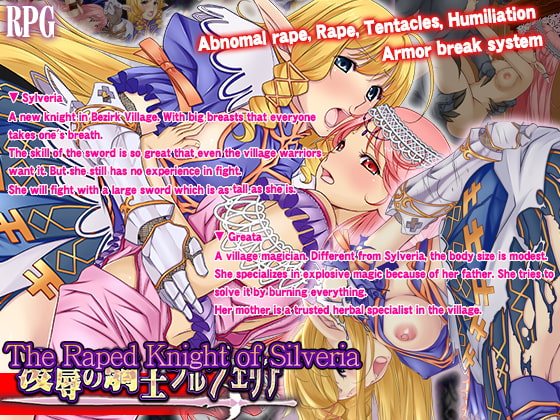 There are many creatures in this world more than humans and animals.
Elves in the forest kept from interacting with humans and demons.
They quietly lived in the deep forest.

Sylveria, the best sword user in the village, was expected by the villagers
and she went on her first job … but

Tentacles, sneaky bandits, orcs with sexual desire, etc.
Sylveria get through many difficulties with her partner, Greta.

— Armor break system !
Armor will be broken if she was damaged in the battle!
The big breasts of the hero are appeared!

— Abundant sex situations
By bandits … by orcs … sometimes by huge tentacles!
They stain the skin of beautiful elf!
The hero’s partner is also raped!
Sexual harassment will be caused by the village elder who she believed!
Leaked with an orc …!
etc

You can enjoy various scenes.

— Orthodox RPG
Everyone can enjoy this RPG. This adopts a simple method.
HP will be recovered as she grows up.
You can be relived even when there are no recovery items!

— Voice (Voice : Shirakawa Paco)
Voices are included in the main character and her partner! you can enjoy not only scenario,
but also, sex scenes and battles with voice.

* Battle voice can be switched ON / OFF in the option screen
* The default: ON

— Sylveria
A new knight in Bezirk Village. With big breasts that everyone takes one’s breath.
The skill of the sword is so great that even the village warriors want it. But she still has no experience in fight.
She will fight with a large sword which is as tall as she is.

— Greata
A village magician. Different from Sylveria, the body size is modest.
She specializes in explosive magic because of her father.
She tries to solve it by burning everything.
Her mother is a trusted herbal specialist in the village.