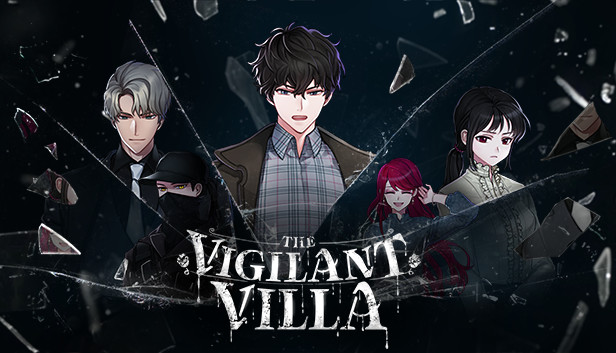 The Vigilant Villa is a suspenseful deduction game inspired by the classic “Stormy Hill” story model (a certain type in locked room mysteries). For seven days, ten guests are accidentally trapped in a hilltop villa, completely cut off from the outside world. A quirky villa with tulips in full bloom, an enthralling hymn ringing out at midnight……Right from the first suicide case, all guests are animals caught in an unseen snare.

These mysterious guests, who seem totally unacquainted in the first place, gradually reveal their intricate and secretive relationships; they also become so close to the obscure truth– a truth related with their loved ones and rivals, their lies and betrayal– who’ll be the blessed one at last then?
The gamer will play as a lesser-known novelist writing under a pseudonym-Folmes, a frantic fan of Sherlock Holmes. This time, Folmes is definitely offered a key role to uncover the dusty past and the real killer behind.

** This is a Japanese-Style AVG carefully weaved by dialogues and texts, which will offer players a unique game experience.
* This is a classic“Stormy Hill” story that can fulfill players’ detective dreams.
** This is also a game of exquisite art style and dubbed materials that immerses players in an audio-visual feast.
** Players have complete freedom to approach diverse key clues or documents.
** Players can dive into characters’ deepest secrets through personal story lines and individual portrayals designed by our game team.

We are a group of enthusiasts of suspense stories, also producers behind The Vigilant Villa.
Novels by Agatha Christine, Conan Doyle, Edgar Allan Poe and Ellery Queen always strike a strong chord with us; we lose ourselves in those enchanting worlds they created, imagining us as those protagonists–we are truly on the same journey of discovery with them.

We have to say inspirations gained from classic novels have given birth to The Vigilant Villa -the game itself is not only a tribute to classics, but also, let’s say, an innovative mystery that embraces diverse clues, story lines and ends.