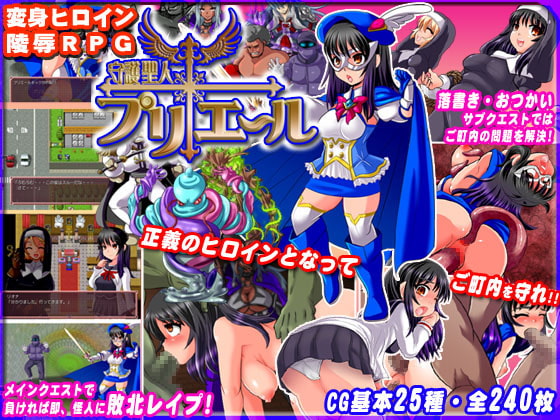 * Story
Ordinary school girl Riona Tano turned heroine St. Purielle
faces gangsters and do-badders who want to f*ck her at every turn.
The sister of the Church anointed her to protect this city
… besieged by dodgy enemies, what will Purielle’s fate be?

* Concept
Become Riona/Purielle and protect the city as best as you can
from sexual harassment enemies — becoming stronger with each loss
of precious clothes.

* Repentance system
Sexual harassment and r*pe make Purielle stronger
thanks to the use of “Muzan-kun”, her auto-redemption device!!
Sex is not a crippling punishment, it’s the way to proceed!

* Main quest
Meet with shady characters in shady locations from
behind the mountain to the secret underground, to a mysterious yakuza drug silo.
Battle bosses in climactic encounters with fail-r*pe scenes!!

* Subquests
Errands, toilet graffiti, underwater exploration, photoshoots, punishing bullies…
Help the people of the city as Riona/Purielle.
As you might expect, she’s bound for trouble even here…