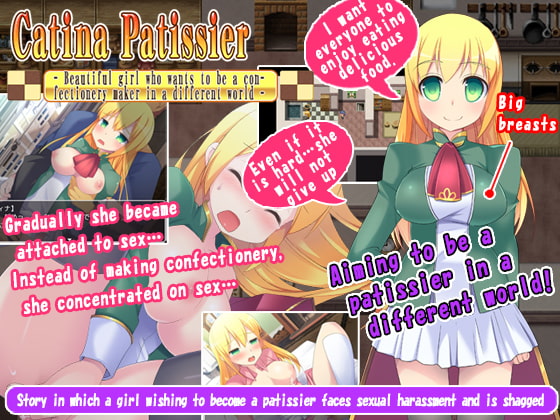 Catina, whose father was a patissier and who grew up watching her father make confectionery from a young age,
one day decided that she wanted to be a patissier herself.

Day after day, with no time to sleep, Catina worked hard to learn how to make confectionery and become a patissier…
However, one day, when she was on her way to vocational school, she was run over by a car and was killed.

In the world after her death, Catina was told of this fact by the goddess, and started to sob
The goddess had mercy on her, and as a special favor, allowed her to be reincarnated in another world.

Catina received ha proposal, and resolved to become a patissier in another world…
Catina was reincarnated and learned her trade and worked in a confectionery shop.

However, the surrounding staff were all frisky severe men, and she was frequently sexually harassed,
and made to eat cookies with pubic hairs inside them.

The customers were all nasty people as well and made claims against her, telling her to repay them with her body.
Her life in the other world was just really tough.

Still Catina overcame all of these difficulties to become a patissier…

The girl who wanted to become a patissier, despite facing sexual harassment and being shagged in the other world…
Soon became entranced in the sex…?
Instead of making confectionery, she concentrated on sex…?