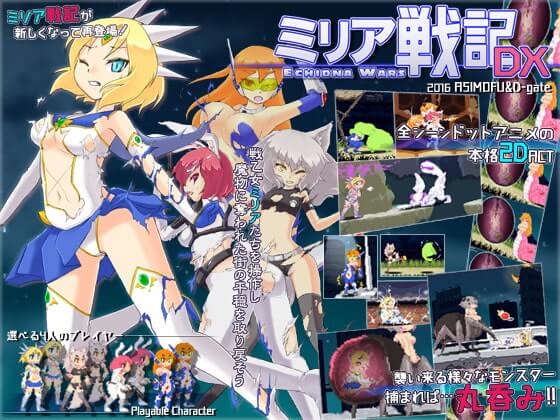 * STORY *
In the provincial city, Ryonazawa, that Millia and co. live,
the once peaceful city is suddenly exposed to an onslaught
of inter-dimensional invaders. ‘Echidna’!

The city-scape left in ruins and
legions of monsters flow through the streets.
Helpless citizens succumb one by one.

In order to reclaim their city and restore peace,
Millia and co. begin their battle against the Echidna.

* Game Characteristics
A stage clearing style action game with 4 controllable characters.
Each character has their own play style and special moves.
Use them tactfully in your fight against the monster army!

All monsters have restraining attacks.
When the character is restrained they will be… ‘played with’ right on the spot.
The defeat effect progression is proceeded by Z key.
In some restraint scenes, resistance can be attempted QTE style.
When endurance runs out, the monsters will devour you and…
Inside their wet and sticky stomach…
(Possible to skip the scene with A key)

Clearing the game once will unlock free battle mode.
You can summon monsters you have faced at least once.

– Stage Select: Regardless of difficulty level,
you can skip to any stage that you have reached at least once.

– Special config, ??? (Title Screen): Regardless of difficulty level,
this will be unlocked upon clearing the game at least once.