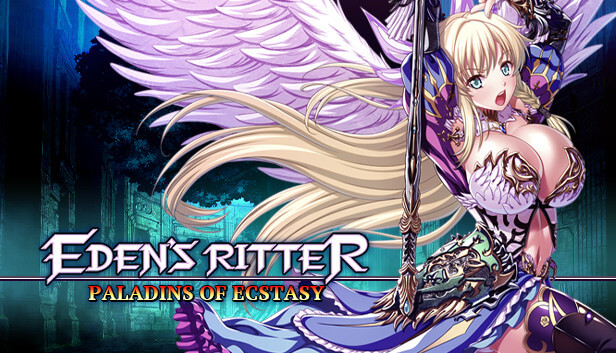 The kingdom of Ellerald, where stretch the roots of sacred Sephirot, is under attack by monsters that ravage the land and its people. The royal priestess Cecily sustains the hearts of the populace through her kindness and piety, while the well-endowed warrior Noein and her soldiers keep the beasts at bay.

The enemy Lustfiends seem as dumb as they are vile, so their pincer assault comes as a shock. When the city’s remaining defenses prove too meager, only Princess Cecily can save the kingdom… but how can this sheltered damsel fend off nightmarish waves of sex-craved creatures when she can’t lift a sword to save her life?
Cecily harnesses the power of Eden to becoming the titular (and titillating) divine warrior, Eden’s Ritter Lucifel! With powerful forbidden magics, she becomes a one-woman army—a guardian angel to her people.
But these powers come at a cost, for the longer she uses them, the more unbearable the aching of her body becomes. Each battle is a race against the clock, pushing Cecily to her limits as she strives to overcome her adversaries before her own sexual urges overcome her! It’s up to you to help Cecily make the right choices in battle and lead her to victory, for should she fail to do so, her enemies will take advantage of her compromised state to bring her journey to a bad ending.

“Doppelganger Story/Ending/Gaiden: An original story first added in a 2019-03-29 special edition of the game. Included.” -vndb

“Xenoarachne Story/Ending/Gaiden: By my understanding, this is the same content that has been sold standalone as “Bangai-hen”. Included.” -vndb