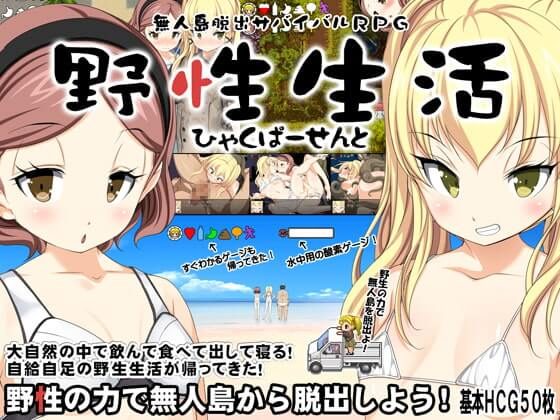 One day, Claris receives a mail from her aunt Charlotte,
evoking nostalgic feelings in her mind. She soon set her
mind to visit Charlotte with her maid Mary.

These two girls are looking for a short but joyful trip…

The airplane they got on however, suddenly malfunctions
and it causes them to be thrown out and fall into the ocean…

Later on they get drifted onto an uninhabited island
without any severe injury… somewhat fortunately.

An isolated island floats alone in the aquatic desert with no
people nor civilization… But they have to eat and drink to survive…
The great nature subjects them to an ordeal of endurance.
Throughout the life on the island, their hidden wildness is to be awakened…

[Life on the Island]
There are many probably edible things scattered around the island.
Eat a lot and defecate a lot whenever getting hungry!

* Want to make something…
Use Claris’ ability “Making Things” to make items with her recipes!

* Not motivated enough…
Just eat, drink and take it easy!
Motivation can follow after!

* Mary hardly brings valuable things…
Mary only brings garbage to you. Never count on her!

* For what can an old man be useful?
He won’t be useful except c*ck-related imagination!

[Dress-Up]
Pose Art On / Off selectable in “Skill” in each character.

Bars in the upper left corner of screen (from the left side):
“Wildness” “Health” “Moisture” “Hunger” “Feces” “Urine” “Stamina”
* They share the stamina bar.

[Underwater Action]
When diving into the water only “Oxygen bar” appears in upper screen area.
Running out of the Oxygen bar instantly causes a game over regardless of remaining health.

* If the protagonists HP reaches 0 in battle = Game Over. Take care!