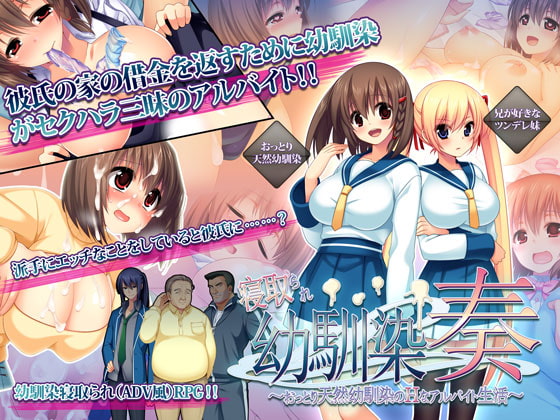 * Story:
Kazuki Matsumoto and Kanade Fujiwara,
sophomores in high school in modern day Japan,
were childhood friends in puppy love.
They had yet to take the first big step—
a fact which infuriated Kazuki’s little sister Chika to no end.
Chika put niceties to one side
and gave her brother a blast of real talk.
Her explosion propelled Kazuki to finally ask Kanade out.
She said yes.

Once they were together, it wasn’t long before
Kazuki and Kanade made love. They were each other’s first.

However, the happy times didn’t last.
Kazuki’s father Shozo had been staving off bankruptcy
with debts that now came due. The collectors were coming.
Shozo paid what he could, but it only bought time.
The debt was still 5,000,000 ($50,000).

Kazuki threw himself into part-time jobs to help out.
Chika and Shozo worked too; the Matsumotos would survive this!
It meant being away from Kanade,
but when Kazuki said this to her, she proposed to work as well.
Kanade and Chika tried to discourage it but Kanade was stubborn.
So be it. Any amount was helpful, but Kanade herself
promised to earn at least 1,000,000.

So began Kanade’s part-time worklife.
But how far will she go to save the Matsumotos…!?

* Game:
Kanade attends school in the daytime.
When school’s out she can do other actions:
research jobs, work at them, rest at home…
there are many ways to spend time.

In order to start work Kanade needs to research first.

Kanade has only so much stamina each day.
(If she has none, she must rest a day.)

If Kanade abandons her sense of guilt,
there are ecchi part-time jobs available too…

Keeping all this in mind,
happy earning and good luck!