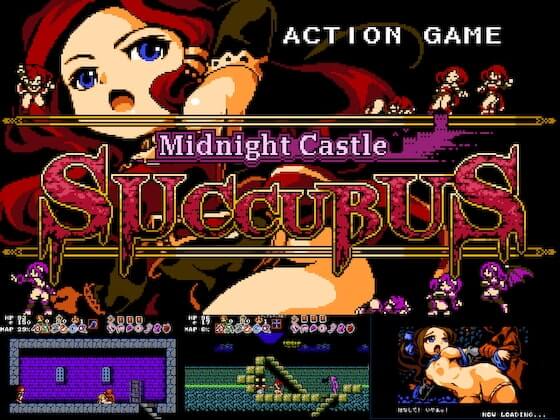 * Succubus Hunter’s Way
Succubus issues threats against humanity once every 100 years.
While men die weirdly and young women disappear one by one,
a succubus hunter visits a cursed city under the moonlight.
Let’s rescue abducted girls and defeat the succubus!

* Sub Weapons
– Scythe: Goes in a ballistic trajectory and penetrates through enemies.
– Boomerang: Goes to the corner of the screen and returns.
– Bomb: Stays still for a moment and deals damage to enemies.
– Clock: Stops enemies’ movements for seconds.
– Cross: Aims and chases after a nearby enemy.

* HCGs and H Pixel Animations
There are 16 girls confined somewhere in the vast map.
An HCG will be shown when you come close to a girl and
an H pixel animation when you arrive in the scene where she is confined.

* H Scenes
When she gets lethal damage while clothed, her HP becomes 1 and she gets naked!
If she is damaged without clothes, she will fall prey to monsters.

* You can switch between Japanese and English on the title screen.