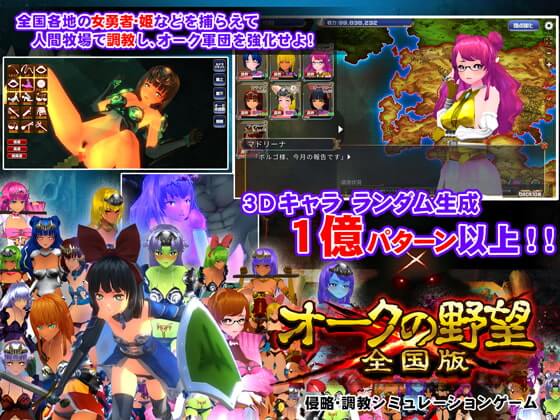 Turn all the female heroes and princesses into breeding slaves!

The Orcs will rule this entire nation!

Capture the female heroes and princesses from all over the nation
and ‘discipline’ them at your human farm to strengthen the Orc regimes!

The Game Flow:
1. Survey various regions, find “Female Heroes” & “Princesses” and capture them.
2. Discipline the femstock you have in captivity.
3. Impregnate the femstock with your Orcish seed to strengthen your army.
4. Use your newly breed forces to invade new regions of the nation…
Among the girls that can be captured, some are particularly proficient at
breeding strong and healthy warrior Orcs! Some girls even have ‘special powers’…?

– Randomly Generated Female Characters
The appearance of the female characters is randomly generated.
The beautiful, the ugly, the busty and the flat chested. They all exist.
Heroes and princesses and girls from various backgrounds.
Find a character that matches your tastes perfectly.

– Regarding Discipline Mode
In the “Discipline Room” you can do whatever you please to the captive girls.
There are various methods of discipline at your disposal.
While limited at first, when you capture a certain character…?
Also, upon 100% completion bonus commands will appear.

……Why, did we ever end up where we are.
Since the dawn of history, we Orcs have
been abused by the more intelligent human
race and now we are on the brink of extinction.

I, the heir to the Orc throne, gained the powers
of wisdom and strength via a sudden mutation.
This must certainly be a decision by the heavens.
That it is not desired we Orcs become extinct.

So let us begin against those heinous
human beings… An Orcish Counterattack!!!