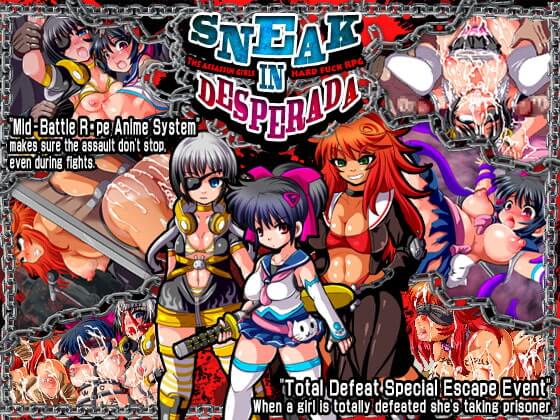 Charmy heroines show down against YAKUZA and TENTACLES in ankoku marimokan’s new RPG:

* STORY
Three girls brimming with curiosity
team up in a building that’s full of gangsters!
However, the big boss of this violent HQ
has made a pact with the devil
and the girl are the intended sacrifice.
Facing massive orcs and otherworldly squids,
are these heroines fated to succumb?
CAN THEY SURVIVE THE EPIC VILLAINY?

* FEATURES
The “Mid-Battle R*pe Anime System”
makes sure the assault don’t stop, even during fights.
When a girl is totally defeated she’s taking prisoner;
break her out in a “Total Defeat Special Escape Event”

Complete the game to throw the unlock switch for TOTAL CG & H REPLAY LIBERATION!
Losing fights for the H scenes on purpose is such a pain in the ass!
It’s a special kind of misery to make progress while concerned with hidden events!
Well, rest easy. SNEAK IN DESPERADA feels your feels.