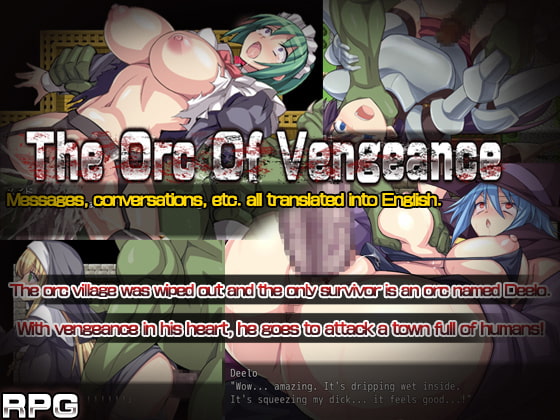 [Story]
An Orc village…
Here there be abducted Human and Elven girls
being relentlessly r*ped and impregnated by Orcs.
A peaceful village living happily in peace.

… but, suddenly one day, that peace was shattered.
The humans came and raided, ransacked and rescued!
Killed the Orcs, burnt the village and destroyed everything.

Deelo, an Orc that was off hunting Humans returns.

The village was but a sea of flames.

His comrades all killed, not even his father was spared…
It was on this day, Deelo’s furious tale of vengeance began.

[Vengeance R*pe]
Kill the husband before her eyes, then strike down his wife for a strangle f*ck.
Mother and daughter on top of one another for a simultaneous r*pe!
Elven dancer and sister of the faith, find where they are hiding and insta-r*pe!!
Everyone will be inseminated, none spared from the punishment!!
They will be forced to replace the Orcs they killed by birthing new ones!

[Puzzle Solving]
In the town there are various defensive traps created to ward off the Orcs.
Disable them and find the humans to exact your revenge!
If you find a girl, it’s a perfect Insemination Chance! F*CK R*PE & VIOLATE!
Then impregnate them to satiate your vengeful soul!
Raise the flag of an Orcish revival over the pregnant bellies of conquest!