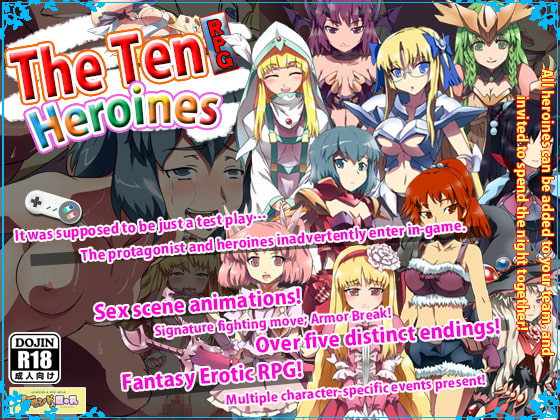 ** Story
My new computer game finally arrived!
Upon activation, the protagonist finds himself… in-game!?
He somehow stumbled into the game as a playable character.
Furthermore, he’s the hero!
Hmmm… The NPC girls are quite hot…
In search of clues for returning back to reality, the hero begins his journey.

** The Ten Heroines
During gameplay, ten frivolous heroines appear.
There’s no mercy if they turn out to be your foe. Attack with your signature move; Armor Break!
The Heroine is exposed as her clothes wear off. What sort of R18 game is this…!?

Upon inviting all heroines as team members, get to know them better! Invite them to the bed!
The heroines offer their virginity towards the hero…
The sex scenes are animated.

Would our hero succeed in returning back to reality?
Hidden aspirations… Betrayal… Backstabbing… The plot makes multiple hairpin curves.

There are five possible endings to the game.
Take it your way! You can go as the crow flies towards the ending, or listen to whatever the heroines have to consult with you.
And don’t forget to spend the night together with them!

** Others
The in-game illustration was completed by Mr. sinzan.
Completing the game should require no more than 5 – 8 hours.
There’s flexibility with the game difficulty. There is also a CG mode available. This is unlocked once obtaining a specific item.