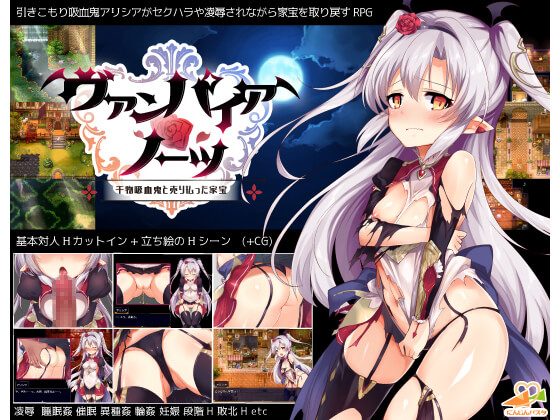 [Story]
A vampire girl, Alicia Bartley, lives in the depths of a thick forest.

She was born with scholastic and athletic talents in an aristocratic bloodline.

But she has one secret: when she is alone in her room, she is a total couch potato.

One day, when she runs out of money, she sells gems stored in a treasure warehouse.

Later it turns out that the gems are Bartley’s heirloom which is descended through generations.

In order to get them back without letting her father come to notice it, she decides to go interacting with humans.

[System]
There are H scenes spiced up with standing portraits and cut-ins.

Most H scenes are shown with standing portraits and cut-ins.
Some H scenes have CG.

* More sexual harassment and H scenes are planned to be added in updates.

* The save data cannot be transferred from the trial version to the retail version.