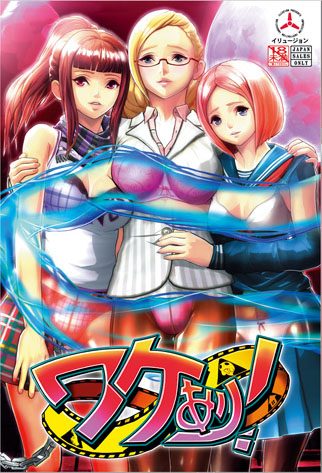 Three lovely young women leave in an old inn that they inherited from their grandfather. A young man named Tenpei Ikaruga moves in and discovers a little demonic creature in his room. The new acquaintance gives him a magic camera that allows him to look underneath women’s clothes for a while. Armed with this helpful tool, Tenpei tries to develop relationships with the young women in order to see more than even the magic camera might allow.

Wakeari! is essentially a simulation game, mainly consisting of visiting various rooms in the inn, engaging in automatic conversation with the girls, using the camera in order to see their underwear, and eventually building up relationships enough to have sex with them. The game uses cel-shaded 3D models for the women, and the sex scenes are fully 3D and interactive. Camera-undressing must be performed within an allotted time limit; the player must quickly drag the mouse over the girl’s body, uncovering areas in a way not unlike paint applications. Physical movement in the game is restricted to camera only.​