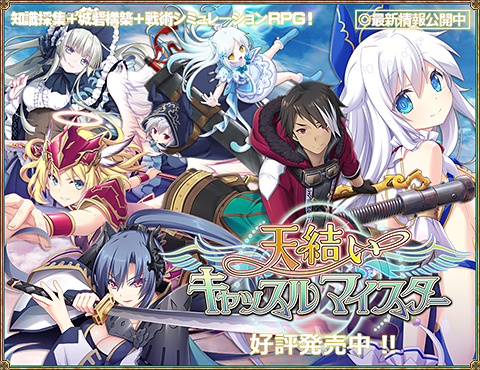 “Magesmiths” are wizards that specialize in labyrinth construction and restoration. Avaro, one of them, sought to one day run his own workshop. To realize this dream, he accepted a job in Influse Kingdom of investigating some ruins. Unfortunately, he got caught in a cave-in and ended up lost. As he wandered, he came across a girl, sleeping inside a magic stone, Fia.

After waking up, Fia told him that she has no memory of herself; however, she knows that she is unmistakably a Goddess. Continuing, she tells Avaro that she could, if she wanted to, move the entirety of the ruins with her Godly powers, and she points out that she has to, no matter what, make it to the closed-off holy ground of the Kingdom. The “Mist Corridor of the Sacred Sound.”

Fia, who has said nothing but what could only be nonsense so far, invites Avaro to join her on her journey, saying that he can use these ruins as his workshop however he likes if he does. Although doubtful, Avaro accepts her conditions and becomes the apostle of the self-proclaimed Goddess, and while using the moving ruins as his atelier, they head north.

Before long, rumors of the ‘Gualacuna Fortress’ are spread across the country, and while fighting anyone who comes after the fortress, thinking that it has valuables or is a threat, Avaro searches for the truth related to the Goddess’ memories.

Along with the Goddess of Marriage, “The Story That Weaves Bonds” marks the beginning..

!!! Update v1.07 is installed, it shows 1.00 cos of the translation patch. All appends are installed.