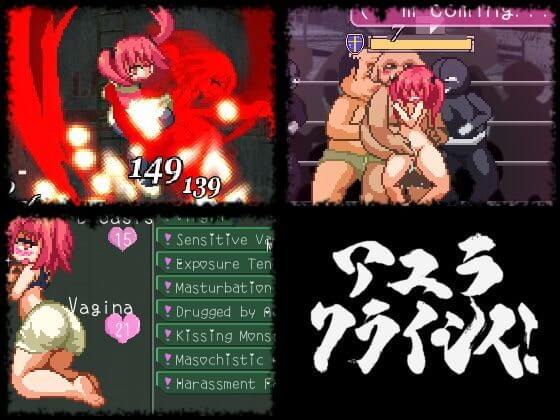 Getting attacked while unable to stand because she just climaxed
Declaring her own slavedom while being publically trained in the ring
Getting disciplined and spanked as she rides a perverted kid
Becoming dazed by Mesmerizing light and made to have sex as the newly wedded bride of a D*ck
Getting addicted to sex and creampie because she was pumped too much by mob monsters
Getting played with while inhibited from climaxing…
And many other situations and states in which she gets attacked.
Also featuring event-exclusive Futanari and big boobs, as well as clothes.
Can also play as a virgin. (There are no merits or demerits to remaining a virgin.)

Fun Action
This game is battle-focused.
Players can enjoy an original battle system with firm impact and easy controls.

This game uses simple controls and fun yet stylish action sequences, but can also be enjoyed as a serious game at higher difficulty levels.
Difficulty levels exist from Easy to Very Hard.
Sexual elements do not vary between difficulty.

Players can choose to take down enemies in a flash with the Easy mode, or engage in hard-core battles with the Hard mode.
They can also choose to offer their chastity up to mob enemies, or get forcefully taken by strong enemies…