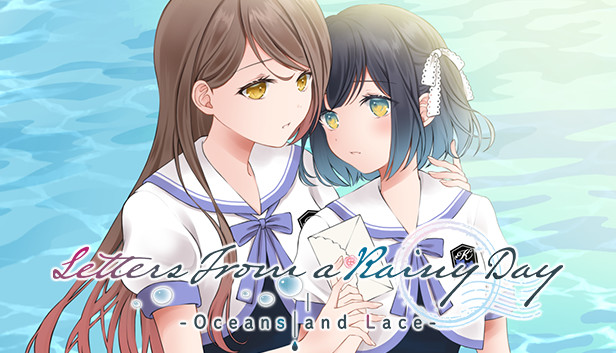 ‘Letters From a Rainy Day -Oceans and Lace-‘ is a yuri adventure game
based on the theme of love between girls at a girls’ school in Kamakura, Japan.
One blackmail letter leads two strangers to start dating,
and their relationship slowly changes.
The Steam version includes Simplified Chinese, Traditional Chinese, English, and Japanese versions, and supports multiple languages that can be switched in-game.

The prestigious private girls’ school, Kikyou Academy,
educates young ladies from elementary age to university.
With cell phones forbidden on school grounds,
letter writing is a pastime for many of the girls.

One day, Shiori Minato is asked out by an older girl
she doesn’t know–Mikoto Kurahashi.

Shiori: “She’s confessing to me… But why does she look so angry?”

Still, she says yes, thinking of it as an opportunity
to build something between them.

One day, popular student Mikoto Kurahashi receives a blackmail letter,
threatening to harm her sister, Yumi Kurahashi,
unless she asks out a first-year student named Shiori Minato.
At first, Mikoto thinks it’s a prank–until Yumi gets hurt.
So, she asks Shiori out in order to protect her sister.

Mikoto: “Was so she desperate to date me that she’d resort to blackmail?”

Mikoto starts dating Shiori believing her to be the blackmailer.
At the same time, Shiori struggles to get Mikoto to engage with her.

It’s June in Kamakura, and the hydrangeas are blooming.
Two girls are brought together,
their relationship manipulated by blackmail.
And so begins their bittersweet story…