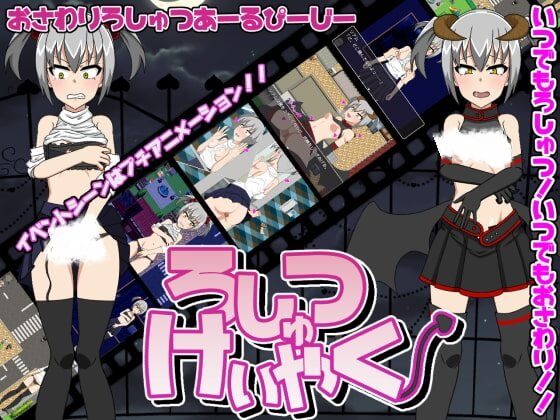 Freedom of exhibiting around the town and touching her!!
To strip her off? Or to touch her? You can do whatever with mouse control!!
Retrieve energy (semen) while touching can be done anytime you want!!

* Prologue
A devilish succubus “Liam” descended on the protagonist Yuuichi!!
Liam has made a pact with Yuuichi but later it turns out that Yuuichi
is such a pervert who gets turned on towards nothing but exhibitionism!!
But her purpose to retrieve energy (semen) must be attained so that
Liam unwillingly starts doing exhibitionism plays.
However, she gradually gets into exhibitionism……

* Sometimes she demands it by herself
With enough sexual training level and lewdness level, she comes to demand energy by herself.
Sometimes sneaks into bed, and at other times demands it in public……

Prostitution function
Such as demanding energy (semen) from townspeople, exposing lewdness on the internet…

* Desire to urinate
Drinks are available in vending machines. When you make Liam drink them,
she will have an urge to urinate after a while. She can relieve in restrooms or
public, but if you keep her holding it for a long time she will wet herself.

* Townspeople
Some men in the town chase after Liam as soon as they find her exhibiting.
If touched by one, he starts molesting Liam’s body. She cannot take any
actions until he gets satisfied or she successfully tears herself away from him.
Sometimes extra men gather towards her resulting in being molested by a group of men.
You have to be careful even if she is in a building without people because
sometimes they come into the building to assault her.

* Items
There are many items such as rotors, electric massager, vibrators and so on.
Those items can be used to increase excitement level.

* Liam’s Independent Activity
With some restrictions, she can solely act. For example, she can tempt men.

* FPS Control
Heavy processing operations such as animations can be adjusted to suit your device.
For example, On / Off breathing motions, adjustable number of NPCs etc.