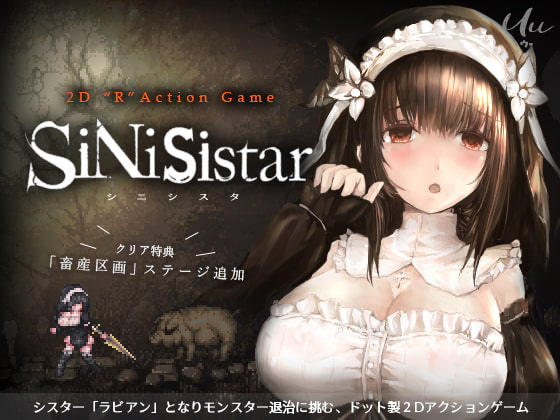 This is a simple 2D action game featuring Rabiane,
a Sister sent by the Church to exorcise monsters in a cursed land.

The game is centered on themes of masochistic tendencies, yearning for death, as well as despair at being attacked by terrifying beings.

*This game features sexual and violent scenes, as well as depictions of grotesqueness.

Included in this game are two versions, for Windows and Mac.
*Game data are saved separately.

Post-release updates are planned for additional material or fixes,
and as such we recommend creating a DLsite account and adding this work to your Favorites.

Though the in-game text is primarily in English and Japanese,
you can change to Simplified or Traditional Chinese from the pose menu.

A member of the Church sent to Kessaria, an abandoned city overrun by monsters.
With an abandoned cathedral as her base of operations, she takes on these monsters alone.
Big-breasted.

About 40 different kinds of monsters attack Rabiane.
If she runs out of energy, she will meet with various “”ends.””

Almost all monsters have exclusive animations,
and some of them even have post-ending scenes.